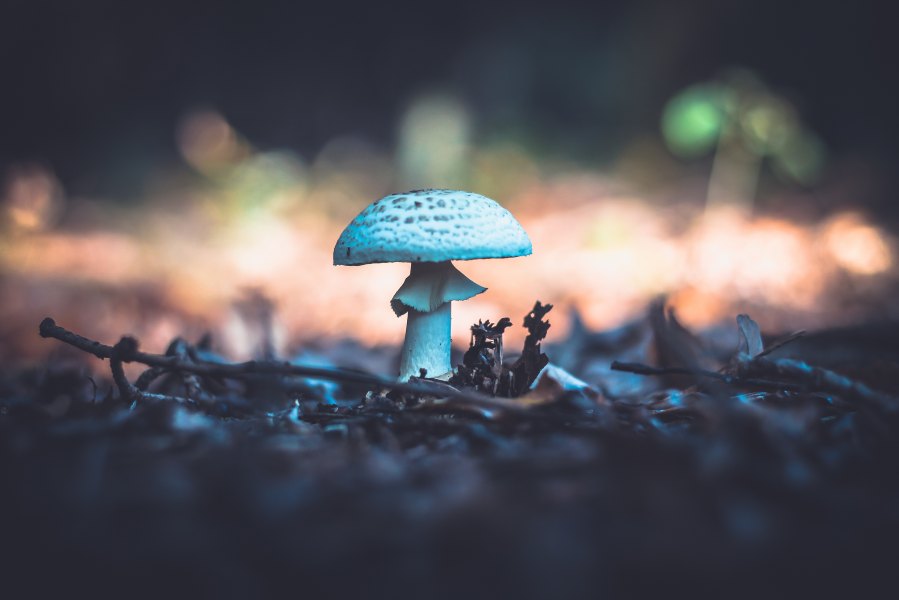 Millions were dead after the worst war this world had ever seen. Mass graves were found all over the world. The earth had been unable to keep up with the amount of dead bodies coming in, and we were running out of places to put them.

The toxicity of the human bodies leached into the soil and into the groundwater.
Chemical weapons had been used and the bodies were filled with compounds that the earth couldn’t break down, and neither could we. People were getting sick, and despite the end of the war, people were still dying.

Traditional Western burials had been long forgotten, a rare and expensive luxury. I’d always felt that traditional burials were really just a way for people to deny their humanity, to distances ourselves from our mortality. Now we all had to face death and the processes that followed.

Ever since the war ended, I had hardly left my lab. We needed a solution to the deaths, and I was sure I had one. Almost.

I’d developed a mushroom strain that fed on human corpses and neutralized the body toxins. The hope was that we could propagate the spores in the mass graves, and as they grew, our dead would decay. I just didn’t expect it to be so successful.

We’d been waiting on a cadaver to run the final test. In a controlled environment, the mushrooms were able to decompose a dead body in a matter of days, without exposing the surrounding environment to the body toxins. It was more than I could have hoped for.

It didn’t seem like anything could go wrong with this. We had exposed the spores to animals before and after the decomposition, and it didn’t seem to have any impact on living creatures.

It was enough to go on when our situation was only worsening. We had to deploy the spores.

All over the world, populations were in a sharp decline, and there was total peace as people clung together, trying to preserve what was left of us.
We deployed the spores all over the world, and the fungi took hold in the mass graves, digging deep into the soil to find food.

Within a few days, people stopped getting sick. The mass graves became inert piles of compost.

I finally left my lab and went to see the fine work of my fungi. It was almost as if the war never happened, but I was still faced with the reality of how many people we’d lost. If only we’d worked faster. I wasn’t sure if it was a tragedy the world could really recover from, but I experienced something that had become unfamiliar lately: hope.

I went home that night and slept deeply, until I was jarred awake at 3 A.M. by my phone ringing.

“Hello?” I answered, my mouth barely able to form words.

“What is it, Brian? Nothing is wrong. This was my best sleep in months.”

“Well,” he said, “You’d better get used to not sleeping again. Come to the lab right now, and avoid going near any mass graves.”

I sighed heavily. “Brian, if this is a joke, I’m going to kill you.”

“If you don’t hurry, I might die before you get a chance to kill me.”

“I’ll be right there.” I disconnected the call and fumbled through the darkness to get dressed, picking up anything off the floor that was closest.

Brian’s face was pale when I arrived. I’d nearly driven myself off the road on the way there from fatigue. It seemed to be catching up to me all at once, which accentuated the dread that was filling my body like bags of sand.

“What’s wrong?” I asked after he’d yanked me inside the building and locked the door. Everythign seemed eerily quiet tonight aside from Brian’s frantic gasping.
“You have to see this.” He brought me to the lab and pulled images up on a computer.

“What am I supposed to be seeling here?” I squinted at the images and yawned.
“The mushrooms.”

“Yeah, sure. They grew and did their job. They should be receding now that their food source is gone.”

“That’s the problem,” Brian said. “They’re not receding. This image was taken today.” He backed up a few pictures to show how they’d expanded their territory.

“Why aren’t they stopping?” Now I was wide awake, and the hope I’d been feeling was replaced by a wrenching in my stomach, bile in my throat and my veins being flushed with a minty tingle.

“I don’t know. But they’ve been releasing spores, Andrea.” He pulled up another image. I recoiled.

“Yes. A living person with mushroom spores growing in their skin. And it’s not limited to just those exposed to the mass graves.” He showed me a list of recent deaths along with where they’d died.

“They’re spreading outward from the mass graves. But I don’t understand! We tested it on the living and nothing happened.”

“It’s not affecting the animals,” he said. “They are only feeding on humans. And as they run out of food, the spores pass to a new host.”

“Oh my God.” I put my hands to my mouth and tried to keep myself from hyperventilating.

“I was hoping you had an answer for that.” He pulled back a sleeve and revealed his arm. A small but identifiable fungi was sprouting.

I almost fell backwards as I scrambled to distance myself. “It’s going to spread! And you brought me here knowing that.”

“Andrea, it’s going to get you no matter what you do unless we can find a solution. It’s only a matter of time.” He put his sleeve back down.

“Have you tried removing it? Maybe we can just pull it out.”

“It doesn’t work. They just grow back.” Brian looked more pale than ever.

“Well, keep pulling them out and disposing of them until we can figure it out. We can at least slow them down. You’re not going to die. And wrap it up so we can prevent the spreading of the spores.” He nodded weakly and let out a strangled sob.

“I just don’t know how to fix this. It’s not like we can dig them out, make you decay faster to deprive them of a food source, and we can’t remove their water source. You’re a perfect host.”

“You’re not helping. I’m not a specimen of yours.”

“Have you tried digging it out instead of just pulling out the top portion?”

“I can’t do that! I can’t mutilate myself.” Brian’s voice was now choked with tears. Then he grasped his chest. “It hurts! Oh God, it hurts.” He tensed up for a few moments and then relaxed before I could act.

“They’re decomposing you from the inside and consuming your organs. You’ll die of organ failure if we can’t stop it. Is it just the one? Will you let me try to surgically extract it?” I was desperate to make something work.

Brian took off his shirt. I gasped and nearly vomited. His entire back looked like a rotting stump of a tree being taken over by fungi. They were working fast. Too fast. They’d never decomposed anything at this rate in the lab.

I retrieved a kit I used to dissect specimens and approached Brian. He sat down and gripped the arms of his chair, pressing his fungi-filled back against the chair. He squirmed with discomfort, but he kept his eyes trained on me, fear overwhelming his features, his wide eyes bubbling over with tears.

“We have to try, Brian.”. I held up a scalpel. He tensed up more and closed his eyes, nodding, sweat beading on his forehead.

“All I’ve got is a local anesthetic.”

He nodded, clenching his jaw.

I turned to retrieve the anesthetic, but before I could grab anything, Brian began to scream. He clawed at his chest and blood began to gurgle from his throat. I dropped my scalpel and ran to his side.

“No, no, no, stay with me, Brian. We can do this Please stay with me.” I didn’t realized I was screaming until my voice became hoarse. I jumped back as his body began to decompose in front of me, blood seeping from his pores and crevices, his body cavity collapsing.

Then, he was gone. Not even the bones remained. I watched as the mushrooms shriveled on the floor and died. It was over. It had to be over.

I felt a pinch on my arm and instinctively reached to rub away the discomfort. My hand rubbed over a bump, and I stopped breathing. I rolled up my sleeve. The mushrooms hadn’t disappeared.

I’m a lifelong writer, photographer, and visual artist. I love reading and writing in all genres, with a focus on speculative fiction. When painting and photographing, I love to focus on little things we easily miss, and I focus on a fast, loose style. I have created a life filled with joy, and I feel like it's my purpose to share that with the world through all my art. View all posts by Amy Yun